skip to main | skip to sidebar
I will give thanks to Thee, for I am fearfully and wonderfully made; Wonderful are Thy works, and my soul knows it very well. Psalm 139:14

One of the hazards of Spring time around here is the MUD.  Everything is muddy for weeks.....sometimes months!  Jilly found that out first hand today when we walked out to the end of the driveway to get Nathan off the school bus.  She was following him back to the house, running as fast as her little legs would carry her in a snowsuit and boots.  Next thing I know, she trips....landing first on her face and then rolling to her back.  She was not hurt at all, so it was hilarious!  She just stood up and kept going - oblivious to the fact that she had mud EVERYWHERE.  Guess we'll give those winter things a little wash today. (: 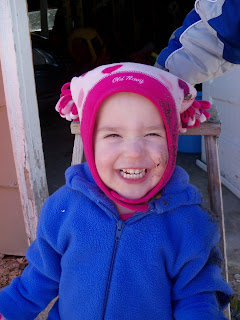 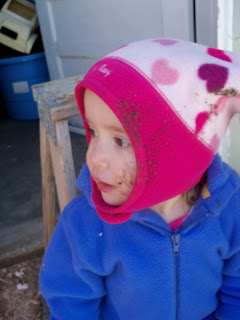 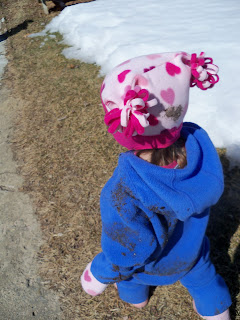 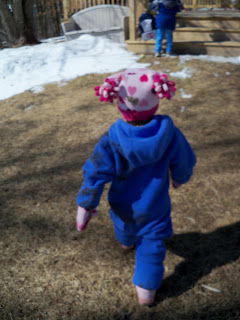 This video of Calvin as a baby is Nathan and Jillian's favorite lately.  Jillian even acts it out from time to time!
Posted by Jen at 4:44 PM No comments: 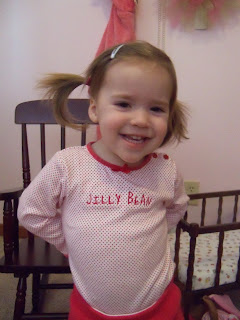 For those of you losing sleep over this.....we have not found the penny.  For awhile I was very diligent about looking, but I've been slacking a little.  Not a fun task.  I think I'll just assume it's out and leave it at that.

Any objections?
Posted by Jen at 9:10 PM No comments:

Today is my sweet Nathan's 5th birthday. I can hardly believe it. What do I say about Nathan?

We knew from the moment he entered the world at 10lbs 7oz that things were going to be different with Nathan. He was the fluffiest baby I have ever seen. Apparently I've told him that a lot, because to this day when he asks me a question about when he was little he says, "Did I do that when I was a squishy baby?" He was indeed a very squishy baby. 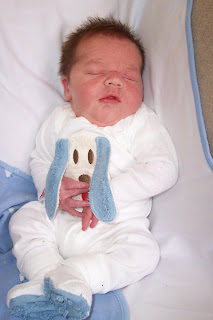 In our family Nathan is the perfect mix of hilarious and loving. Even as a baby he was funny. From the time he was very tiny his hair stuck straight up on his head. It was as if it was saying, "I'm not going to lay down and follow the rules....I'm going to be bold and fun." This is Nathan's attitude. Here he is at about 10 months old. One of my very favorite pictures of him. 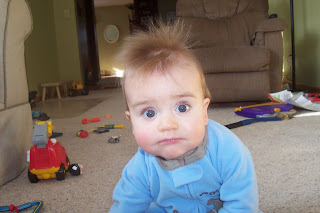 Marc and I laugh about this picture a lot because at about 2 1/2 years old we found out Nathan's eyes were VERY bad. I mean he can't see anything. So when we look at this picture we feel like he's staring at us like, "Is anyone out there?" What a sweet little thing.

Nathan has the ability to make me laugh and cry in the same day. He is so funny and says things that I just don't expect. He is also very strong willed and can throw a fit at the drop of a hat. That emotional personality definitely has it's ups and downs. The positive part is that Nathan LOVES everyone. He has been known to hug a total stranger. When we go into Target we have a rule that he can only talk to someone if he knows their name. He has lied to me about this before. He was riding in the cart and before I could stop him he started a conversation with an older woman as she walked by. After she walked away I leaned down and said, "Nathan, do you know her name?" He nodded, so I said, "What is it?" He looked at me very seriously over his glasses and said, "Karen." We both knew this wasn't true, but I was not able to argue with him at this point. The thing is, while I am usually embarrassed that he is asking a total stranger where her baby is.....people love him. We get SO many comments about how friendly and loving and delightful Nathan is. Honestly the world would be a better place if everyone had Nathan's attitude towards others. This year on Christmas Eve we were at Marc's sister's church in Roseau. As we headed up to communion, Nathan shook the hands of the first AND SECOND person in each row and told them Merry Christmas. Who does that? It was awesome. I truly want to be more like Nathan in this way. He is amazing.

Nathan lives every day to the fullest. He jumps up and down the whole time he is talking about something that excites him. His WHOLE body shows how he is feeling....not just his face. Today, on his 5th birthday he asked me to sing to him at each meal. We sang with a candle in his toast, in a cookie at lunch, and twice after dinner with a cupcake. I mean it's his birthday why sing it only once? My favorite thing that Nathan says right now that I don't want to forget is "Yestertime." This is a word that can be used for anything that happened before today. Example...."Yestertime, when I was a baby I LOVED sleeping in my crib."

Here are a few pictures from his special day today... 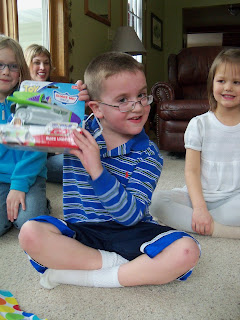 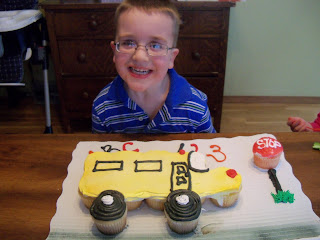 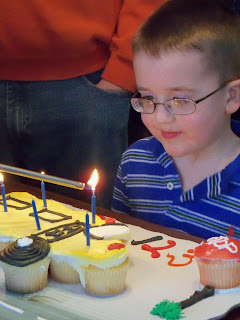 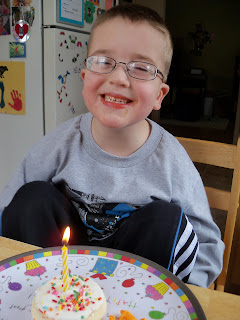 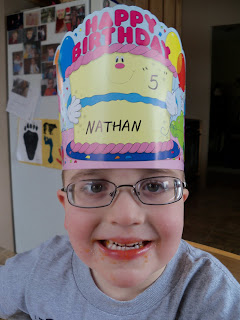 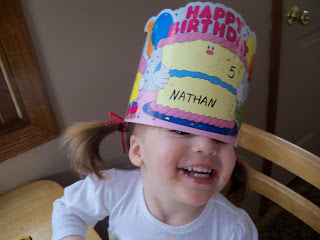 Nathan is just a joy to parent and I can't believe God chose me to be his mom. Every day is an adventure and I look forward to every single one. We simply can't wait to see the plans God has for Nathan and the awesome things he will do with his life! I love you my sweet Nathan! 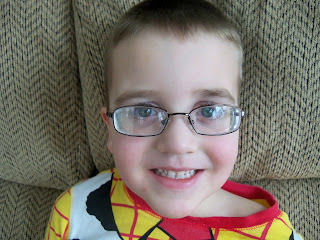 So....On Thursday evening I was making dinner. I needed something to entertain Jillian for awhile so I dumped her piggy bank on the living room floor so that she could put them all back in. Good times, I know. She loves it though. I was making dinner without interruption when I came in the living room to see how things were going. Nathan was sitting in the rocking chair and as I started to leave the room he said, "I ate a a quarter....whoops it's too late. It's in my tummy." I stopped in my tracks and said, "Excuse me?" He repeated what he had said earlier and I just sighed. I thought, "Great. I might as well put dinner away. We're going to the hospital for yet ANOTHER x-ray." This kid has had like 5 x-rays in his life already. I went to call my mom and see if this really was a concern. She agreed that if it really was a quarter, we might need to be concerned. I decided to have a talk with Nathan. I wanted to get to the bottom of this since I know in his world...all coins are quarters.

We sat down at the kitchen table together. If you know Nathan, you know he does this great thing where he looks at you over the top of his glasses. That's the look I was getting.

Me: "Nathan, did you really swallow some money?"

Nathan: "A quarter. A brown quarter."

Now we're getting somewhere. After doing a money line up on the table he pointed to the penny as the one he had eaten. I felt a little better. Calvin, however, was very concerned that something serious might happen. "MOM! What if he gets really sick? What if he gets cancer or something?" I assured Calvin that people do not get cancer from eating coins. I then looked at both of them and said, "Do you know what's going to happen to that penny?" I wish you could have seen their reactions when I told them where we would find the penny. Their faces went from shock to hysterical laughter. It was great.

The best part of this story came the next day. Nathan had to go to preschool. I decided I better call and make his teachers aware of the "situation" just in case he had a tummy ache or something. When I called I was told that both of his teachers were out for a workshop but that she would give the message to the sub. I thought that was the end of it.

About an hour after Nathan got home from school I got a call from the sweetest woman who had been his sub that day. She told me the same thing everyone always says.....he is so delightful.....what a sweet little boy, etc. She then said, "I got your message about Nathan's snack he had last night." Then in the perfect sweet preschool teacher voice she said, "I just wanted to let you know he did NOT pass that here at school."

Not a phone call I ever saw myself getting when I dreamed about parenthood.
Posted by Jen at 1:41 PM 1 comment:

Okay. I'm going to make a crack at this. I have been wanting to blog for awhile just so I have a journal of all the funny things that happen around here. I just don't want to start and then not continue. Nathan is simply making it impossible for me to wait any longer. The kid is a blog all by himself! So...I'll see what I can do!
Posted by Jen at 1:38 PM No comments:

Calvin was created to be a big brother. He is so kind, and takes great care of his brother and sister. Calvin loves football, basketball, baseball, the Minnesota Twins, and the Vikings! He is in 5th grade.

Nathan is in 2nd Grade. He is a very curious little fellow who makes me laugh hysterically every day, and also gives me gray hair. Nathan is so loving, and when he meets you...you are his best friend.

Jillian is our sweet baby girl. She's in kindergarten this year! She loves to play with babies, try on clothes, and boss her brothers around. Jillian talks like crazy and has no idea how small she is!

Jen
God has given me three of the cutest kids in the world. They make me laugh, they make me cry, and I wouldn't trade a day of it for anything in the world. It is a privilege to be known as their mommy!